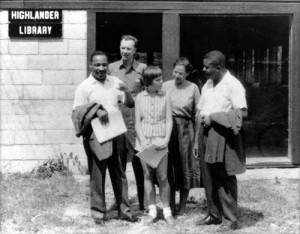 In Tennessee, the Jefferson County Sheriff’s Office is investigating
whether white supremacist graffiti found in the parking lot of the
Highlander Center is linked to a fire last week that destroyed one of
the civil rights institute’s buildings. On March 29, the fire tore
through the main office of the Highlander Research and Education Center,
the famed social justice organization that once hosted Rev. Martin
Luther King Jr. and trained Rosa Parks in nonviolent civil disobedience.
This is Highlander co-director Ash-Lee Woodard Henderson.

Ash-Lee Woodard Henderson: “We are physically OK.
Everyone on our staff is physically OK. No one was physically harmed. …
We did lose, obviously, some really important historical documents. It
was not our full archive.”

Authorities are investigating the incident as a possible arson and
hate crime, after a white power symbol was found spray-painted in the
center’s parking lot. The symbol is frequently used by white power
groups and was painted on one of the guns used by the alleged mosque
shooter in Christchurch, New Zealand, last month. In a statement, the
Highlander Center said, “While we do not know the names of the culprits,
we know that the white power movement has been increasing and
consolidating power across the South, across this nation, and globally.

They also burned down three churches, leaving the same signs!